Former PECI civics teacher takes you for a ride along the Millennium Trail, pre and post resurfacing.

My feet were getting bruised from the large stones and uneven ground as I jogged along the Millennium Trail. I needed to pass at least some of the slower moving students and staff, but the thorny brush made that impossible. It was the annual Terry Fox Run at the high school and I had foolishly challenged the students, agreeing to contribute a dollar for every student who finished ahead of me. There were over 600 students attending the high school at that time. I really needed to pass at least some of the students or face an enormous pledge. My feet took a long time to heal from that day. I turned to riding my bike instead. 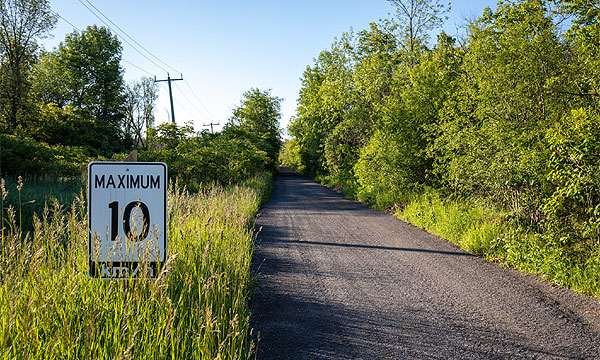 PEC’s success in attracting tourists meant that the increased traffic made bicycle riding along the beautiful and once sleepy roads too stressful so I looked for other options. I had a vague idea that the Millennium Trail stretched right across the County, but no one could tell me much about it. With the road traffic ever increasing, my wife and I made a foray into the unknown. What a surprise to discover a lightly used ATV trail that weaved among all our familiar landmarks and yet actually went somewhere. What a delight it was riding to Wellington where we could rest and find great food. What a pleasure it was to sit smugly among the throng of cars and people knowing we had just dropped in from the secret trail, knowing we would escape along the same unknown route.

We reveled in all the places this trail could take us. Yes, there were many sections of the trail which were so rough we had to dismount and drag our bikes through. There were other places where the trail simply disappeared under water and we were forced to make detours. When we finally rode far enough to cross the Consecon Lake causeway we were elated, but we could not face riding the rough trail back to Picton, so we reluctantly made the return ride along the County roads.

Back on the trail, bruised feet had turned into bruised wrists and those parts that made contact with the bike seat. The trail was so potholed and strewn with fist-sized stones and overgrown weeds that we were unable to take in the bucolic County scenery due to the need to keep both eyes fixed on the trail or risk a bad fall.

Then the Wellington section of the trail suddenly improved. Here was a smooth, wide section of trail that permitted constant sightings of things we had formerly passed, but had never seen before. We were looking up from the trail for the first time and it was wonderful.

While riding the trail I came across two men cutting branches. I stopped and met Barry Davidson and Dave Mowbray, so I pitched in. As we worked that afternoon I became aware of the time and effort given by these and other volunteers who found a way to successfully cut through the delays for the long awaited improvements. That Saturday I was heartened as I met even more of the deeply civic minded volunteers who gave their sweat and hard work for the common good.

Over the next two years nearly 60 volunteers worked hundreds of hours to neatly hand cut the brush along the trail to allow the bulldozer to level the rutted surface of the trail. Next came the dump trucks, unloading thousands of tons of limestone screenings which were leveled by a big yellow grader. I was surprised to witness the slow moving compaction roller rumble past with Barry Davidson at the controls, patiently smoothing the trail into bicycle heaven.

Our Sunday bike ride has changed from a constant look-down experience to rather very much a heads-up experience as the trail becomes popular. So now it is only the regular aches and pains I experience as we zoom down a smooth path through the inspiring County landscape that we can leisurely enjoy far from the maddening traffic on the roads. We are fortunate to have this incredible Covid-proof recreational resource for all that found its genesis in civic minded County residents.