Listed below are an assortment of media articles and information concerning our Millennium Trail. Each link opens in a new window 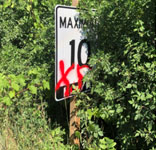 Two speed limit signs recently installed along the Millennium Trail wetlands to better protect wildlife, have already been vandalized, and garbage is being left trailside.

The pair of 10-kilometre-an-hour signs had a large “x 5” spray painted in bright red beneath the number 10.

Dave Robinet, a local trail user and past president of the Rotary Club of Picton states it’s an obvious – and illegal – act of opposition to the reduction from 50 km/h.

Former PECI civics teacher takes you for a ride along the Millennium Trail, pre and post resurfacing.

My feet were getting bruised from the large stones and uneven ground as I jogged along the Millennium Trail. I needed to pass at least some of the slower moving students and staff, but the thorny brush made that impossible. It was the annual Terry Fox Run at the high school and I had foolishly challenged the students, agreeing to contribute a dollar for every student who finished ahead of me. There were over 600 students attending the high school at that time. I really needed to pass at least some of the students or face an enormous pledge. My feet took a long time to heal from that day. I turned to riding my bike instead.

Upgrades to the Millennium Trail through the Slab Creek and the Hubbs Creek provincially-significant wetlands is set to begin Tuesday, Nov. 12.

This phase of upgrades will occur where the trail crosses Station Road in Hillier and continues east to Danforth Road.

The weather this weekend is looking great for Brushing of the final section of the Trail. When the volunteer teams are done, the trucks and rollers will finish the surface, and then,the aspirations of a 46 km Prince Edward County linear park will be realized, due to your help.

Thanks to the efforts of everyone who came out and brushed, we have completed the Wellington Section, brushing 11 km in record time.

What’s next: Two volunteers, experienced in the use of pole saws will begin cutting the overhanging trees, first in the Wetlands section, and then Wellington. This cutting is necessary to allow the dump trucks to lift their beds up in order to deposit the gravel on the Trail.

Members of the Ontario Provincial Police’s East Region SAVE (Snowmobile, ATV, Vessel Enforcement) Unit were in Prince Edward County on Saturday to conduct general patrol enforcement on the Millennium Trail.

As a result of the enforcement, the officers on the trail issued one Trespass to Property Act charge, one fail to have chin strap fastened (helmet) and one licence plate violation. At the RIDE check one seatbelt violation was issued and a Roadside Screening Device was administered with a pass as a result.

If you’re looking for a beautiful scenic walk or bike ride through the county and want to keep track of your distance, the Millennium Trail has reached another milestone with the installation of kilometre markers. With the Picton trailhead located near Lake Street, residents and visitors can easily delve into the various restaurants, diverse businesses and cultural attractions offered within historic downtown Picton.

“The Prince Edward County (PEC) Trails Committee, municipal staff and many volunteers have done an incredible job moving this project forward,” said Steve Ferguson, Mayor of the County of Prince Edward. “I have heard a lot of positive feedback in the improvements and we are excited many more individuals and families will be able to access this amenity.”

The kilometre markers are part of the revitalization of the trail which includes resurfacing and grading new directional and safety signage and staging areas.

The revitalization of the Millennium Trail has reached another milestone with the installation of kilometre markers.

“The Prince Edward County (PEC) Trails Committee, municipal staff, and many volunteers have done an incredible job moving this project forward,” stated Prince Edward County mayor Steve Ferguson. “I have heard a lot of positive feedback on the improvements, and we are excited that many more will be able to access this amenity.”