The dream is a reality.

The resurfacing of the Millennium Trail, which began when kt misener of the Bloomfield Bicycle Company proposed it to the Rotary Club of Wellington in the fall of 2011, was completed on June 12. All 46 kilometres of it, from Carrying Place in the west to County Road 49 in the east.

“The Millennium Trail is now a true County infrastructure gem,” said Patrick Maloney, the Chair of the PEC Trails Committee (PECTC) and Vice Chair of the Ad Hoc Trail Upgrade Committee (AHTUC). “We hope that every single resident uses it and takes great pride in it.” 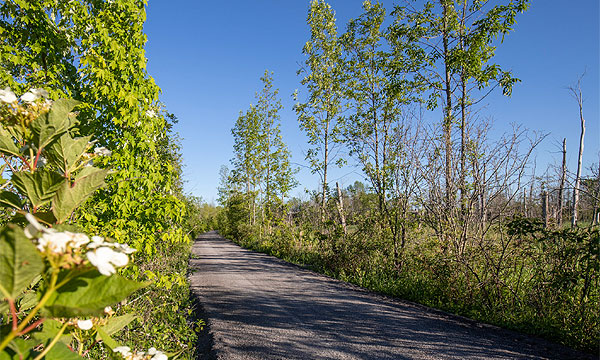 It’s literally taken a village – or a County in this case. The project has been a truly collaborative effort, from the passion and commitment of the leadership group to The County to the countless volunteers to the generous donors to the environmental consultants to the general rah-rah supporters.

“It’s been an incredible journey to this point,” said Barry Davidson, Chair of the AHTUC and ex Chair of the PECTC. “Seeing the realization of a dream come to life through the financial generosity and volunteer help of so many, has been very fulfilling.”

Maloney echoed those sentiments. “The completion of the resurfacing of the Millennium Trail is a huge accomplishment. It’s taken a truly dedicated team of PEC neighbours to get us to this milestone. I’m so proud with what has been accomplished to date by the volunteers and members of the PEC Trails and Ad Hoc Committees.”

While the trail has been completed, Davidson cautions users that the fresh limestone screening still isn’t packing due to the lack of rain. It will be rolled again once the heavens open up.

When you add it all up, the numbers are truly staggering for the core part of the project, which started on September 4, 2018. It took 648 days from start to finish – that includes weather delays, mechanical breakdowns, setbacks of one type or another, winter, and of course, the COVID-19 pandemic.

The physical resurfacing itself took 26,450 tonnes of limestone screening, or a whopping 1,260 truckloads! The environmentally sensitive wetland areas of the trail, primarily along Slab Creek and Hubbs Creek, added another 2,900 tonnes of coarse stone (100 truckloads) in order to raise those sections by 2.5 feet to combat flooding and protect the local wildlife.

And of course, a project of this magnitude also needs funding. The County provided the bulk of the funding, while the PEC Trails Committee raised $128,250, which included a single $40,000 donation by an anonymous donor. An $118,000 grant came from the Ontario Municipal Commuter Cycling group, and TD Friends of the Environmental Fund contributed $15,000 for the wetlands work.

Geraldine Jenkison, a local artist, helped raise some of those funds in two very different ways. She participated in a fundraising effort to walk the entire trail, and also donated a portion of her art sales – from 60 paintings of the trail.

“A couple of friends thought up a one-day fundraising event, hiking the trail end-to-end, with sponsors,” remembers Jenkison. “It sounded like to good thing to do, so I asked to join in. I canvassed my very generous friends in advance for contributions.”

“What struck me during that walk was the beauty of the diverse environments the trail passes through. It was a revelation and a wonderful experience,” and eventually led to her idea to create and sell paintings of the trail.

And while this phase of the trail is being celebrated by its many varied users – hikers, walkers, joggers, cyclists, ATVers, and so on – the planning to keep improving it is already in the works.

Along with new kilometre markers and reduced 10 km/h speed limits along the sensitive wetlands areas, the PECTC and The County are adding new informational signage, creating four rest areas, implementing a long-term maintenance program, tracking how animals use the trail, and promoting user education and information – soon to be a regular, upcoming feature in The Wellington Times.

“It’s truly becoming a linear park for all in The County to be proud of,” said Maloney.

And how does the person who originally proposed it way back in 2011 feel about it all?

“I love the trail. LOVE IT! I ride it nearly every day. I use it as my commute to Wellington and Picton,” enthuses misener. “It feels like it has shrunk The County for me… things seem so much closer, because I can just hop on the trail!